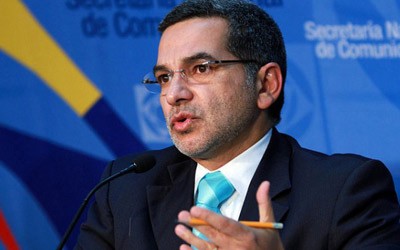 Fernando Alvarado, former Secretary of Communication of the Presidency and current Minister of Tourism, responded to the report of the control agency that noted a dozen contracts and payment agreements executed between 2013 and 2015.

“The only thing that can be advanced of the report, is that the issuance of any administrative or civil sanctions are still under analysis,” he said in a statement released yesterday on social networks.

He said that this is the third examination he has undergone along with his team. Before this, the National Audit Office reviewed the complaint that says that “the Alvarado brothers benefited from state contracts.” And the contracts with McSquared PR Inc.

Irregularities were not found in any case, he assured.

“We will always be willing to show transparency in public administration_ (…) We have served and continue serving the requirements and inquiries necessary for the Audit Office to clarify the facts, since this agency is our judge,” he said.

At which stage is the inquiry? Following publication of the special examination, the document passed to the Responsibilities Department. There, according to Alvarado, “administrative and civil responsibilities (if applicable), with the respective legal basis” will be determined.

A period of discharge will then be opened. Officials identified by the National Audit Office, for example, for having made campaigns in favor of the Alianza Pais party with public funds or by signing contracts with companies linked to public officials will be able to submit their defense arguments.