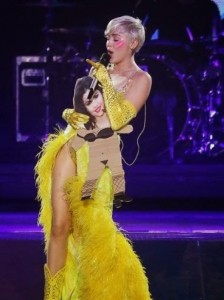 Miley Cyrus created controversy again, this time by mocking Selena Gomez at a recent concert of her tour Bangerz

In a recent concert in Milan, Italy, during her world tour Bangerz, the young star Miley Cyrus returned to create controversy after an assistant gave her a cardboard doll with the face of Selena Gomez, which was accepted by Cyrus, who danced with it to the rhythm of the song `Fu ‘(fuck you).

This episode in which Miley Cyrus mocked Selena Gomez, won the dislike and criticism of the `Selenators’ (fans of Gomez). Finished her presentation, Cyrus launched the doll into the air.