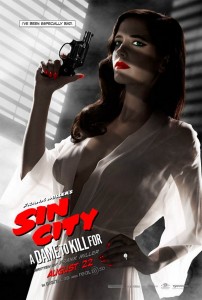 Dimension Films is currently working on editing the poster

French actress Eva Green, 33, posed seminude for the advertising poster of ‘Sin City2’ a movie directed by Robert Rodriguez. This has caused that the Motion Pictures Association of America censures the poster.

The premiere of this film is scheduled for August of this year, according to various international media, Dimension Films is currently doing the editing of the poster for future public display.