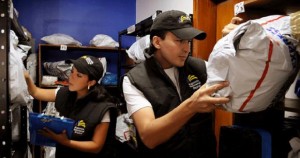 Since yesterday became effective the collection of the $ 42 fee for those who import through the 4X4 shipping system (up to $ 400 and up to 4 kilos).

José Alfredo Jimenez, from CMA Logistics, said that the charging of the rate is currently done in cash because it is a duty. If paying with credit card, customers would have to pay an extra percentage for the service. The merchandise that arrived at the company in the morning was of 20 deliveries, even though use to came 100, Jimenez said.

Other couriers like Melchisedek have not charged the fee yet, since shipments arrive today.

Ximena Cevallos, Ultrabox representative, said the first shipment of this week, comes today from Miami and packets will be counted then.

The National Customs Service (Senae for its Spanish acronym) said that last year were imported $ 152 million through the 4×4 system. 38% of this (58 million) were for purchases made online. By 2015, the $ 95 million that came up last August, were USD 50.3 million for online purchases.