Students marched for the celebration of Guayaquil 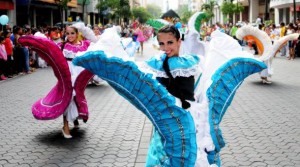 One of the biggest attractions Guayaquil had yesterday for its 194 years of independence was the student parade ‘Independent Guayaquil is my Destiny’.

Floats toured seven miles of the main streets of the city.

Children and adults encouraged with applauses and singing songs of the city during the participation of the students.

The parade stopped about five minutes for the passage of the presidential motorcade.

The second stage of the float parade of representative animals from the city finished at th noon.

In the afternoon, folk and dance groups, as well as school students presented at the 9 de Octubre Avenue until Malecón Simón Bolívar.

Today at 20:00, the singer Olga Tañon offers a musical show in Paseo del Parque, located at the entrance of the Samanes park. In addition, tomorrow will be held the nautical parade, where allegory boats will sail down the Salado estuary.

USA has its first fatality by Ebola