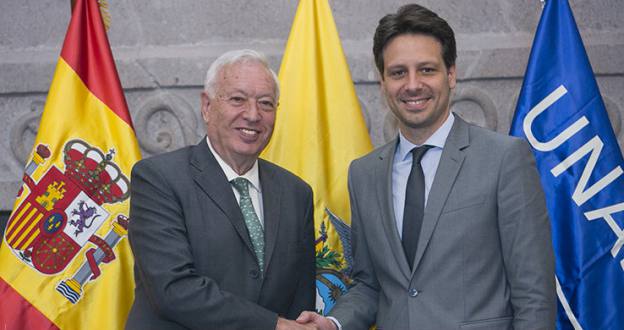 Foreign Minister of Spain Jose Maria Garcia-Margallo said that the Iberian government will support the elimination of visas rquired by the European Union (EU) for Ecuadorians.

“Spain managed, not without difficulty, the exemption of visas for Colombians and Peruvians and we would like be able to play the same role with our Ecuadorian brothers,” said Garcia-Margallo at a joint press conference with his counterpart from Ecuador Guillaume Long .

The Spanish foreign minister said that his government will work so that Ecuador enjoys the exemption. Nevertheless, he admitted the difficulty of achieving that goal, although he was optimistic to indicate that soon “the good news that Ecuadorians will benefit from the same exemption already enjoyed by the Peruvians and Colombians” will occur.

Garcia-Margallo also noted that Spain will advocate for the realization of the trade agreement with Ecuador wants to ratify with the European market.