Sucre is Expected to Strengthen Trade Between Countries Within Latin America 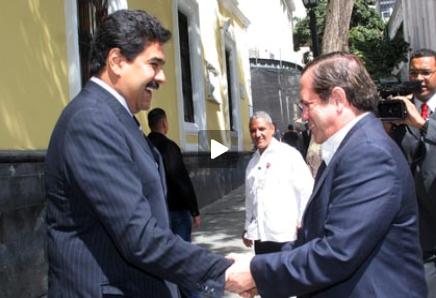 Aimed at strengthening the capacity of the Single Regional Compensation System (Sucre for its Spanish acronym), as an exchange mechanism, Venezuela and Ecuador signed a Framework Agreement of Cooperation; this way they expect to strengthen bilateral relations in the field of trade and production development between both countries.

On Monday at the headquarters of the Venezuelan Foreign Ministry the official document were signed by the Ecuadorian Foreign Minister Ricardo Patiño and his counterpart Nicolas Maduro attended the ceremony.

“(…) These agreements replace those from the Andean Community (CAN),” a regional agency that Venezuela is planning to leave next April 22, Maduro said to the press and he also said that a new type of relations are being developed in the framework of the Bolivarian Alliance for the People of Our Americas (ALBA), which includes the production of the companies, common markets, and trade in order to break the dollar’s dominance.

Daniel Betancourth Will Give An Online Unplugged Concert