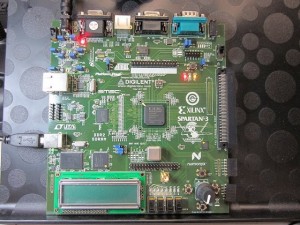 Imagine having a super computer in desktop size, that idea is not too far from becoming a reality since scientists at the University of Massachusetts Lowell were able to put together over a thousand processor cores onto a single chip.

There is also a green angle to this idea: FPGA (Field Programmable Gate Array) chips can be more power efficient than their competitors, and if less computer time is needed to process complex tasks, then the overall power consumption of computers using the tech could be impressively low.

FPGA systems have existed for a while; Dr. Wim Vanderbauwhede’s team developed them, the programmers of this kilo-core chip.

After their discovery, the UM’s team put to test their brand new innovation by running an intensive algorithm, they chose the core motion of MPEG video processing, used in many online video sites—such as YouTube or Megavideo—the results were jaw-dropping, the scientists were able to process 5 Gb per sec of movie while using the kilo-core FPGA computer.