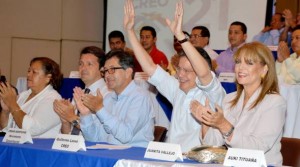 Sociedad Patriótica (SP) and CREO initiate actions to start collecting signatures for referendums to reject the proposal of a reform to the National Consitution by the ruling party.

Yesterday, the Assemblyman from SP, Gilmar Gutierrez, requested to the National Electoral Council (CNE for its Spanish acronym) the forms to start collecting signatures and submit a proposal for draft amendments that halt the regime project to impose indefinite reelection.

Gutierrez said: “In the case of an amendment, Section 441 says that 8% of the signatures required and the qualified text go to referendum, and if accepted, it immediately becomes a constitutional text”. The party also hopes to change Section 218 of the Constitution, which allows the Citizen Participation Council (CPC) to elect the members of the CNE.

In his speech, Tituaña said that the group will defend “the feel” of 73% of Ecuadorians who want a consultation on the issue of the indefinite reelection.

Lasso said that what is sought is to prevent those who conform the current regime to “become eternal in the power”.