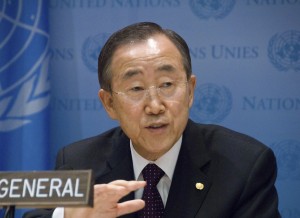 The UN Secretary General Ban Ki-moon this Friday asked the Security Council to impose an arms embargo in Syria, during a speech in which he detailed a six-point plan to resolve the conflict.

“It is essential to stop the flow of weapons into the country. It is Irresponsible on the part of foreign powers and groups to keep on giving military support to the parties that are committing atrocities in Syria,” Ban said.

Among Ban’s proposals figure imposing an arms embargo and that Syria’s neighbors prohibit the passage of weapons destined to the country through its territory and airspace.

“The war in Syria can not be won militarily,” so the parties have to sit face to face again at the negotiating table. “The only question is how many people have to die before this is done,” he added.