Telecommunications Act would breach the contract of 2008, according to Claro 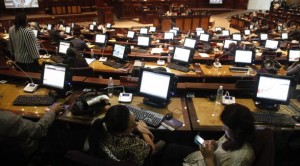 Eduardo Carmigniani, Attorney of the Claro company, said yesterday that the approval by the National Assembly of the draft Telecommunications Act could lead to an eventual demand from the company Claro to the state for breaching of concession contract.

Carmigniani argued that the approval would imply the payment of about extra $ 115 million annually to the price agreed in the concession contract of 2008. For Carmigniani, this constitutes an “undue increase in the price of the concession.”

Furthermore, he argued that six years ago when the concession contract was signed, it existed the same market share, so six years later they consider they do not consider the conditions can be simply changed because the contract lasts until 2023.

Movistar, on the other hand, said they are conducting an analysis of the situation, to give a response on these days.