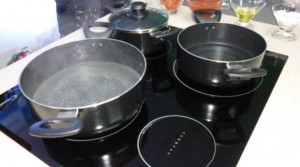 Valencia said that the kitchenware must pass two types of tests: to have enough ferromagnetic components and when heating water it has the power specified by each burner.

From today, the 10 companies that submitted proposals to participate in the process must deliver prototypes that consist on three pots, its lids and a pan.

On June 25 the validated prototypes will be published, according to the schedule of Mipro.

Biess mortgage credits will have their office in Guayaquil