The Biess will rise the goal of credits for this year 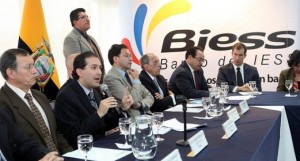 The Bank of the Affiliate (Biess) will raise the mortgage goal for this year. The holder of the Directory of the bank, Victor Hugo Villacrés, announced that the company hopes to deliver this year $ 1,320 million in mortgages, 6% more than the originally planned.

In mid-January, the bank’s management had announced that the goal of housing loans this year was $ 1,250 million, less than the $ 1,261 million delivered last year.

But the mortgage amount delivered last January ($ 111.4 million compared to 106 million expected) led to reconsider this projection and opt for a “more optimistic scenario of $1 320 million.” He also clarified that the Regulatory Board, control entity of the financial sector, must still approve the goal.