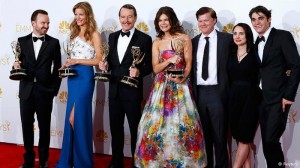 The drama series’ Breaking Bad’ won for the second time the Emmy Award for that category. Moreover, its protagonists Bryan Cranston, Aaron Paul and Anna Gunn, also won the award as best leading and supporting actors.

`Modern Family’ won the Emmy Award for best comedy series for the fifth time, while Jim Parsons of ‘The Big Bang Theory’ won the award for best comic actor again. The prize for best drama actress was for Julianna Margulies for `The Good Wife’.

‘Guardians of the Galaxy’ is a box office success