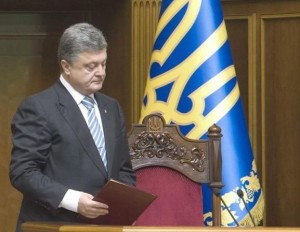 Ukraine will perform parliamentary elections on October 26 after the dissolution of Parliament on Monday by President Petro Poroshenko, accusing many MPs to support the pro-Russian rebels of the east.

“I have decided to end prematurely with the authority of Parliament” Poroshenko wrote on the social network Twitter.

“Many MPs, but sponsors and accomplices, are supporters of the separatist guerrilla fighters,” said Poroshenko in a message to the nation.

The president stressed that 80% of Ukrainians argues for new parliamentary elections.

Ukrainian law stipulates that new elections be held within 60 days from the publication of the decree.