The country celebrates Emelec as a champion 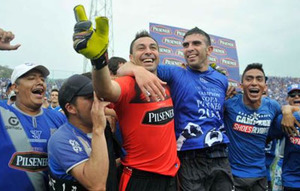 Emelec is a champion

Guayaquil was the city where more people and more strongly celebrated that Club Sport Emelec earned yesterday the Ecuadorian soccer championship after a goalless draw in the stadium with Manta in the stadium Reales Tamarindo of Portoviejo.

However, Portoviejo, Machala, Quevedo, Quito, Loja, Ambato, Riobamba, Esmeraldas and many more cities more organized spontaneous celebrations in the streets and squares, where they predominated chants, shouts, jumps, caravans and dancing to the music and fireworks.

With the tie, with some 20 000 people, Emelec completed 40 points and lacked the time to finish the tournament, they became unreachable for their escort Universiad Catolica, who defeated Barcelona in the Monumental stadium and earned 35 points.

After the game, players and officials celebrated on the court and immediately returned to Guayaquil leading a caravan that took four hours to reach Puerto Principal, because in every city crossing, the bus was stopped to receive the homage of their fans who applauded their passage through the tracks.

The delegation and his followers entered the city on the north side and after some rapid developments the caravan arrived at the restaurant Parrillada del Nato, which is managed by the former goalie, director and technical symbol, Eduardo “Nato” Garcia.

There, players and coaches had dinner and were honored by the board, while blues fans, who had taken the avenue Victor Emilio Estrada from several hours earlier, they kept encouraging and congratulating the champions.

The victory lap, and crowned by award number 11 club championship will be next Sunday at the Capwell Stadium, when they will measure Deportivo Quevedo.