The drug debate divides the PAIS party in the Assembly 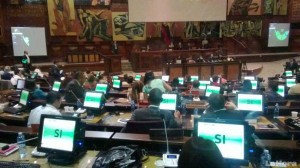 In the report for the second debate, which was passed with nine votes of the PAIS legislators- it is proposed that the minimum penalty for trafficking of narcotics and psychotropic substances is increased from one to three years in prison; as for the scala media, from three to five years.

The president of the Commission of Justice and member of Alianza PAIS, Mauro Andino, called to eliminate that reform of the project. He argued that tougher penalties are not a solution to this problem. He said there are alternative measures, which are not restrictive of freedom, and could be applied. He mentioned the use of electronic devices such as the bracelet.

Andino asked, however, measures to control the programming of the media. He suggested to prohibit, for example, the transmission of “junk programs” and TV series that encourage the drug culture.

His peer, Maria Jose Carrion, is on the other side of the debate. She favors the increasing of penalties against micro trafficking. That is the way, the official argued, to guarantee to society, especially young people, locations free from people engaged in drug trafficking and healthy environments.

Over thirty Assembly members participated in the second reading of the text, in two days. Sanctions and prevention were the points of interest. Although the text also raises the planting, growing and harvesting of plants containing active ingredients of psychotropic substances, Assembly members said that this does not mean a possible legalization.