The goal of the scheme is for approximately three million households to cook under this modality until 2024 as an alternative to the use of domestic gas.

The goal of the government of Lenin Moreno is that until 2024 three million induction cookers are commercialized, in order to take advantage of the electricity supply available in the country and contribute to mitigate the effects of climate change.

According to figures from the Ministry of Electricity and Renewable Energy, between 2014 (when the efficient cooking program was started) and 2017, 750,000 induction cookers were sold, despite the fact that the previous administration raised the goal of three million in 2018 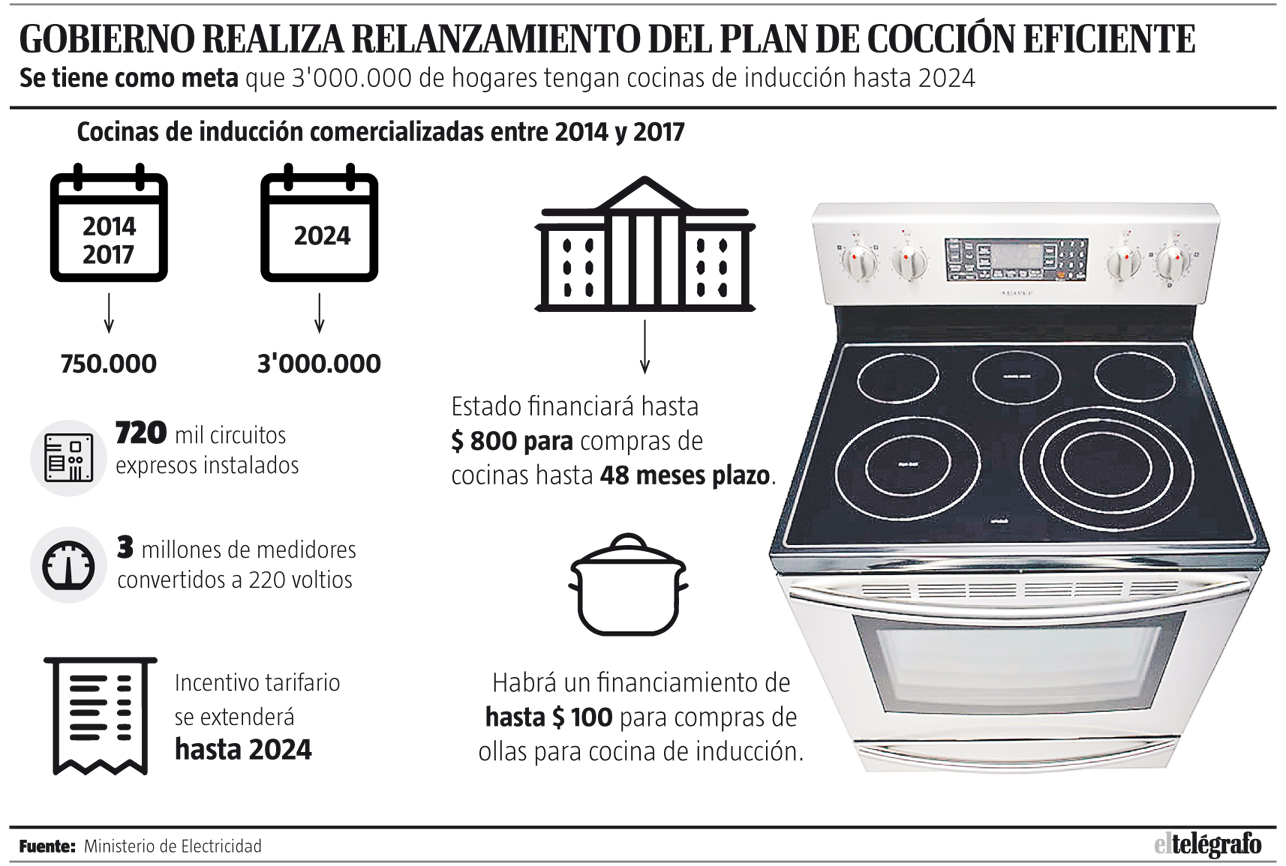 However on Monday, the Minister of Electricity, Elsy Parodi, re-launched the energy efficiency program, extending the goal by six years. To achieve the objective, the official assured that an intense communication campaign will be held to socialize about the benefits of this type of kitchen.

She said that one of the mistakes in the previous regime was to launch this ambitious program without having the necessary electricity network to meet the population’s demand. Esmeralda Tipán, Undersecretary of Distribution, said that the electrical system was re-powered. The internal circuits were installed for the 220 volt service and 3.2 million connections are already installed for the required voltage.

Mariela Aguirre, who bought her induction cooker seven months ago, pointed out that if the electricity tariff has gone up, it is not a drastic increase, since before she paid $ 20 and now $ 22. She saves on the purchase of gas $ 3.50 and It avoids the hassle of requesting the service that sometimes takes to arrive or simply does not attend it.

As a disadvantage she said that the dependence of these appliances on the electric power has played two passes, because when the light went out in his house due to the explosion of a transformer on one occasion and after a storm in another, she could not cook and asked for help to a neighbor.

Juan Pablo Vela, representative of white goods industrialists, mentioned that the three companies that manufacture induction cookers have the capacity to produce approximately 1.5 million. “We are able to respond to the demand that is given. We hope that with the re-launch of the program the demand for induction cookers will increase, but in the meantime we will continue to produce gas stoves, since apart from the domestic market, we export to Peru, Colombia and Central America, “the entrepreneur said.

There are 78,000 kitchens in the country’s wineries, which will be used in the Casa para Todos program promoted by the Government. The homes that are built will come with criteria of energy efficiency and 220 volt connection. Parodi stressed that the objective of the regime is to promote the efficient use of energy through the generation of public policies.

Subsidy of gas in analysis

The former Minister of Electricity, Elsy Parodi, clarified that the future of the new Efficient Cooking Program does not depend on the gas subsidy, which is under review in the political bureau, without there being a decision in this regard.

78,000 induction cookers are pre-packaged and will be used for the Casa para Todos program.

Induction cookers are sold between $ 150 and $ 800. Citizens who acquire them can pay for them within a period of up to four years with their worksheet. (I)