The Assembly trapped in accusations of ‘pacts’ 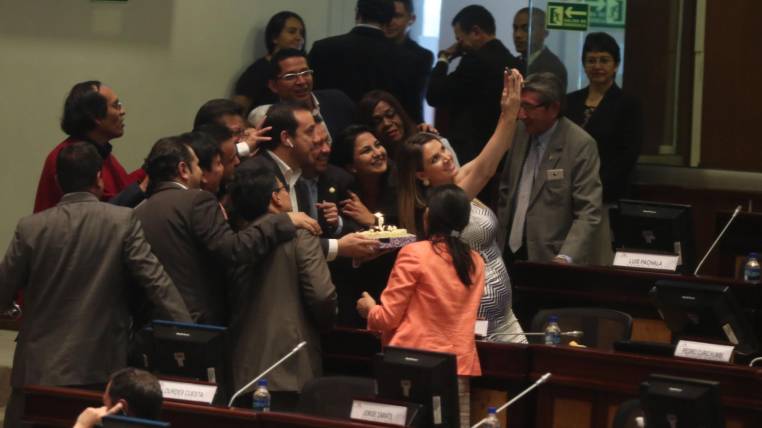 All against all. The discussion about the future of Jose Serrano in front of the Assembly and the possible reorganization of the institution raises suspicions of agreements and secret pacts between legislative groups. He spoke again of ‘political troncha’. The crossing of accusations reaches PAIS, to correísmo, I BELIEVE, PSC and SUMA . That is, to almost everyone.

Last week an audio was broadcast about an alleged plot between Serrano and the former Comptroller, Carlos  Polit , to ‘get off’ to the prosecutor, Carlos Baca Mancheno. The afternoon of yesterday, the Assembly had to define the date of the appearance of the first before the Plenary.

And the assembly members, who in recent months have shown an absolute inability to reach minimum agreements, opted for confrontation. Of course, all claim that they act to defend the   “Institutionality”  and in favor of   “Governability”.

Serrano was the last to join the accusations: he suspects an agreement between the correístas and the CREO caucus . In an 11-minute video broadcast on social networks, the official accepted and justified without embarrassment that he maintained a telephone dialogue with Polit , a fugitive from justice and accused of receiving bribes from the Brazilian construction company. Odebrecht. The explanations offered for later.

Instead, he directed his darts to the vice president Viviana   Bonilla. “They want to take the Assembly by storm,” he said.

She (who denied any ‘arrangement’ in a press release) was also singled out by the Christian Social party. The PSC believe that there is a pact between   Rafael Correa and Guillermo Lasso , leader of CREO, to seize the Legislative Administration Council as well as permanent committees.

Those of CREO insist that the COUNTRY ( morenistas ),   PSC and SUMA had an agreement to save Serrano last week when Homero Castanier raised the request for resignation of the owner of the Legislative. Because   AnaGalarza  He called them “supposedly opponents.”

The truth is that, so far, none of the accusers has presented certain evidence of the alleged pacts. The opposition, which remains at a disadvantage because of the votes, is not able to reach consensus. And, in the midst of all this, the Assembly continues in a virtual paralysis of its activities with a questioned president, without a work agenda and with commissions blocked by the disagreements of its members.

It is the flag of the movement CREO. According to them, Jose Serrano must resign from the presidency and, within seven days, a new holder should be elected, in accordance with the provisions of the Law of the Legislative Function. Guillermo Lasso, leader of the group, ensures that the total restructuring must follow.

Article 18 of the Organic Law of the Legislative Function also establishes the possibility that the president of the Assembly may cease in his functions, among other reasons, by dismissal. So far, Serrano has said he will not leave the position he came to be the most voted legislator. (I)

In nine months, 40% of the ministerial cabinet changed