The ‘hoverboard’ of Marty McFly will be auctioned 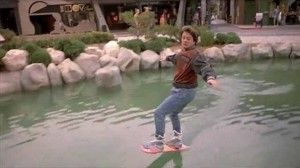 Between 16,300 and $ 25,800 dollars are expected with the auction of one of the hoverboards that the character Marty McFly used in Back to the Future II.

This fictional device, according to abc.es site, will be auctioned in October in London and is part of a sample in which there is the golden ticket of Willy Wonka or the ‘biker’ jacket of Terminator.

Both, the one that gets the skateboard of McFly or any fan of the trilogy starring Michael J. Fox has marked on his calendar year 2015.

At that time, Nike will release the model of shoes that the protagonist used in the film. Known as Nike Air MAG or Nike Power Laces, they have a precedent with a good reason: the textile giant created 1.500 pairs in 2011, available on eBay, and the proceeds went to the charitable foundation of Michael J. Fox