The Well-being plan is exposed at the Expo Milan 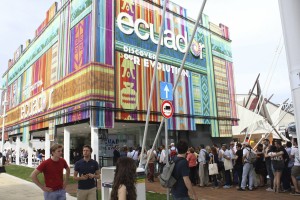 The national stand at the Expo Milan.

Ecuador is present since Saturday in the 2015 Milan Universal Exhibition through its national pavilion,which shows the “well-being,” in addition to a variety of its food production and rich biodiversity.

Diego Aulestia, Minister of Foreign Trade of Ecuador and Freddy Ehlers, Secretary of State for the Well-being, attended the official opening and noted that this the first time that Ecuador has its own pavilion in an Expo.

Visitors will tour the different natural regions of Ecuador: the Amazon, the Andes, the Coast and the Galapagos Islands through audiovisual aids and display cabinets with holograms that explain the characteristics of some of its main products, such as cocoa, roses and shrimp.

At the bottom there is a store of Ecuadorian crafts and a restaurant offering traditional dishes from the various regions of the country.

Bus fares rise is suspended until a set date