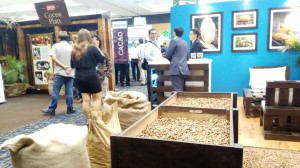 On Monday the Third World Cocoa Summit was inaugurated with the presence of 90 exhibitors, 16 of them multinational companies.

Officials from the National Government and the private sector attended the event, including Ivan Ontaneda, president of the National Cocoa Exporters Association (Anecacao), who referred to the phytosanitary emergency declared by the regime to the cocoa and coffee sectors.

The Minister of Foreign Trade, Diego Aulestia, reported that the cocoa and coffee production sectors have benefited with $ 600,000 by the Drawback system.

He also noted they have business expectations for $ 15 million within the framework of the business conference Aromas of Ecuador, which in the last four editions reached $ 40 million. For this edition 38 international buyers were present.