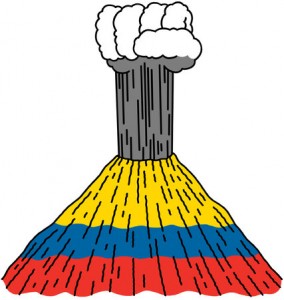 QUITO, Ecuador — There is a strange connection between volcanoes and political crises in Ecuador: They seem to erupt together.

According to Pedro Cieza de León, who chronicled the Spanish conquistadors’ arrival in the Incan Empire, when Pedro de Alvarado entered the land that is now Ecuador in 1534, the Cotopaxi volcano erupted, sending massive gusts of fire and ash into the air, practically reducing the soldiers themselves to dust. As the story goes, the local indigenous people perceived this as a sign of nature’s outrage. In October 1999, the Pichincha volcano, which had terrorized the residents of Quito back in 1660, once again exhaled a billowing column of steam and ash upon Quito precisely during one of the most traumatic political and economic crises in Ecuador’s history. Months later, in January 2000, hundreds of thousands of Ecuadoreans took to the streets and forced the resignation of president Jamil Mahuad, who had adopted the dollar as Ecuador’s official currency after a banking crisis led to the closure of 24 banks, the immobilization of Ecuadoreans’ savings accounts, and the collapse of the sucre, until then the national currency.

Cotopaxi is rumbling again. On Friday, Aug. 13, one day after thousands of indigenous people had walked over 700 kilometers to fill the streets of Quito to march against President Rafael Correa’s government, the 19,347 foot colossus came back to life after 134 years of inactivity and began spewing ashes and gas, which signal the early stages of eruption.

The same day, violent clashes erupted between the protesters and the police, and the indigenous leader Carlos Pérez was arrested with his partner, the Franco-Brazilian journalist and academic Manuela Picq, who was forced to leave the country upon release from jail because her visa was summarily rescinded.

Following the most recent Cotopaxi eruption, Mr. Correa issued a “decree of exception,” which effectively silenced scientists at Ecuador’s Geophysics Institute, an entity that has traditionally addressed and delivered volcano-related news with total independence. Instead, the president has passed the microphone to the Coordinating Ministry of Security, a political agency. The decree also establishes the “anticipatory censorship” of any other information on the volcano’s activity, including news that circulates on social networks. But these networks are essential communications tools in times of emergency, which is the situation right now in the area close to the volcano.

The popularity of Mr. Correa, who has governed with an iron fist since 2007 during a period of economic bounty thanks to high oil prices, is quickly dissipating after years of investing vast quantities of money into a system of political patronage.

The indigenous communities, as well as significant sectors of the middle class, which have grown during the economic boom years, have begun to express their repudiation of the government’s actions. They oppose Mr. Correa’s intention to run for office again in 2017 by reforming the Constitution, which limits presidents to two terms, and reject his governing style, which is predicated on maintaining stringent control of state institutions. They also condemn the alleged corruption that has gone uninvestigated and the money wasted on public works projects and hefty salaries for government employees.

The protests also take aim at Mr. Correa’s abuse of power, which include his suppression of Ecuadoreans’ freedom of speech. The president is a self-declared enemy of the independent news media, which he has termed a “global problem.”

Every Saturday he appears on “Enlace ciudadano” (“Citizen Link”), a show aired on over 300 radio stations and a handful of television stations, during which he spends at least 30 minutes attacking private media outlets, which he calls the “corrupt news media.”

He also uses his airtime to rip apart newspapers that have published pieces he doesn’t like, and to insult journalists who criticize him by calling them “ink thugs.” For about a year now he has been singling out social media users who criticize or make fun of him; he even managed to get the attention of the comedian John Oliver, who dedicated an entire segment of “Last Week Tonight” to Mr. Correa’s crusade against free speech.

According to a report published by Freedom House, Ecuador’s press status — like that of Cuba and Mexico — is “not free.” Since 2013 Ecuador has a Communications Law that created a superintendency that controls and regulates the media, and answers directly to the executive branch. According to Reporters Without Borders, which monitors the state of freedom of speech around the world, this mechanism has cultivated an atmosphere that encourages self-censorship. “Ecuadorean journalists have no choice but to give in to the demands of the government,” the group wrote.

Journalists in Ecuador are warned on a daily basis about possible legal actions that may be taken against us if we criticize the government, and the companies we work for constantly warn us of the risks we take by raising issues the government is particularly sensitive about. Newspapers are being forced to publish corrections, on the front page, with texts, headers and layouts sent directly from the Presidency’s Secretariat of Communication. In newsrooms, lawyers are now as important as editors.

It was in this context that, on Aug. 17, I was fired from the newspaper El Comercio, where I had worked for 13 years. I was dismissed because of an opinion I expressed via my personal Twitter account.

A few days before I was fired, the management of the newspaper — which the Mexican businessman Ángel González bought from the Mantilla family in late 2014 in a transaction that was never made transparent to the public — warned me that if I wanted to keep my job I’d have to give up my right to express my opinions on social networks.

I believe that freedom of expression is an inalienable right, and I am also convinced that only if we exercise this right will we fight the tyranny of silence that some people and organizations wish to impose on us. And so despite these warnings I’ve continued to post my points of view through tweets that criticized the state of exception.

Now, unemployed, at least I have time to go with my two children, who are 14 and 15, to watch the afternoon sky transformed by the columns of smoke coming from the implacable Cotopaxi.

Martín Pallares, a former correspondent for El Tiempo and until recently a columnist for El Comercio, was a Knight Fellow at Stanford in 2009-10.