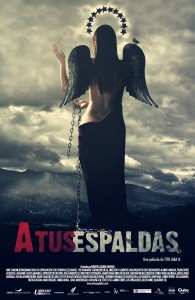 “A tus espaldas” (“Behind You”) joins the list of films that the Ecuadorian film industry offers. This is the first film directed by Tito Jara and lasts 76 minutes.

This is the story of Jordi Lamotta Cisneros, played by the Ecuadorian singer Gabino Torres, a young man born in the south of Quito who tries forget his past and change his social status with the money his mother sends him from Spain.

Jara explained that the position of Virgen del Panecillo (a statuatte located Downtown of Quito), is facing north and turns its back on the south of the city, is a powerful symbol in the popular imagination of Quito. “It reflects the power structures and social separation of the city. The Virgin had to face churches, the government, while at her back have always been the workers since factories have always been located in the south,” the director says.