National Brewery complaints about the expansion of the resolution 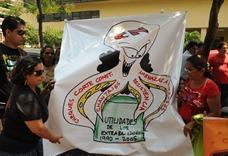 The Ecuadorian National Brewery (CN in Spanish) accused the court for trying to deny them their right to put the extraordinary action of protection that the law empowers them, after the resolution imposed by the third Criminal Chamber of Guayas against the company which establishes that the National Brewery have to pay more than $90 million for unpayment utilities owed to ​​a thousand former workers.

CN promptly criticized the president of the Board, Robert Guevara Elizalde, and still have several pending legal actions to handle. Through a press release, the Brewery said that “the actions of attorney Guevara delay the compliance of the resolution and it seeks to inhibit Nacional Brewery from applying their legal resources which are part of the self-defense right.”

Arturo Cervantes, attorney of former Nacional Brewery ex staff, presented on March 19, a further letter asking the Board to respond “each reason of the points.”

Two weeks ago Judge Guevara said in an interview with El Universo newspaper that “in fairness more times would be given to them (the directors of CN) their chance will be until Monday (March 21) to fulfill 48 hours.” A week later he said that deadline had two readings: The company had comply with the ruling until midnight on Monday March 21 or until then they had the opportunity to express “their intention to pay” in court. None of these happened.

“It’s really outrageous and shocking an unable judge that cannot give an interpretation of its own decision,” expressed the statement sent by the CN.