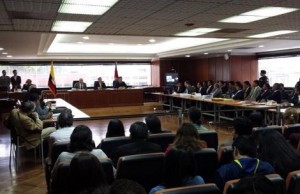 The Attorney General’s Office, Galo Chiriboga said that ‘The Sorrows’ is a landmark for the country, which has been impunity for nearly eleven years event.

The Criminal Court of the National Court of Justice (CNJ) will reinstall tomorrow morning at 8:30 the adjudication hearing of ‘Las Dolores’ case, which is about to reach its legal conclusion.

On the eleventh day of diligence, the General Prosecutor of the Nation Galo Chiriboga Zambrano, will conclude with closing arguments by which he will sustain the responsibility of the last 4 of the 11 defendants in this criminal case.

Until Friday, October 31, Chiriboga accused as perpetrators of murder, in the form of extrajudicial killing 5 former policemen: Douglas Y., Luis S., Hector F., Erick S. and Ricardo Y., and accomplices to 2 other former military Darwin S. and Luis C. For them, the prosecution requested that the CNJ Court imposes a sentence based on Article 450 of the Criminal Code, of 16 and 25 years imprisonment.

Chiriboga said that ‘Las Dolores’ case is a landmark event for the country, which has been unpunished for nearly 11 years.

Last year it was decided to re-open this case by the facts that had not been the subject of the first trial, the prosecutor said.