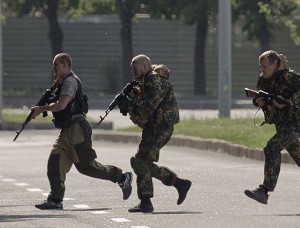 A day after Kiev approved to grant more autonomy and elections in the separatist pro-Russian regions, the combats continued this Wednesday in the surroundings of the Donetsk airport.

As a result of the fighting, two civilians were shot dead in the separatist city in eastern Ukraine.

“Two civilians were killed and three were injured,” said on Wednesday the mayor of the separatist stronghold of Donetsk.

The two new victims raised to 30 the death toll (14 civilians and 16 military), since the entry into force of the agreement, according to official figures count based on the army and local authorities.

Despite the ceasefire signed between Kiev and pro-Russian insurgents on 5 September in Minsk, the airport under the control of the Ukrainian army is the scene of fighting for days with artillery fire.