U.S. claims that Malaysia Airlines plane was shot down by separatists in Ukraine 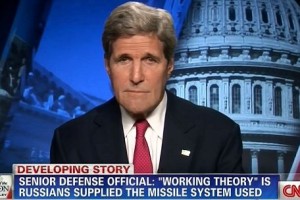 U.S. claims to have detected and observed the trajectory of an antiaircraft missile launch last Thursday when Malaysia Airlines plane was shot down in eastern Ukraine, said yesterday the Secretary of State John Kerry.

“We know for certain that in the last month there’s been a major flow of arms and weapons. There was a convoy several weeks ago of about 150 vehicles with armed personnel carrier, multiple rocket launchers, tanks, artillery, all of which crossed over from Russia into the eastern part of Ukraine and was turned over to the separatists,” Kerry said in an interview with CNN.

Kerry said that the pro-Russian separatists in eastern Ukraine have downed a dozen aircraft in the last month and last Thursday boasted of having shot down another until they realized that it was a commercial airliner.

“We know for certain that the separatists have a proficiency that they’ve gained by training from Russians as to how to use these sophisticated SA-11 systems. We know they have the system,” Kerry said.