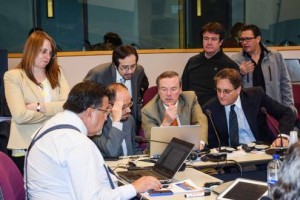 There is the possibility of a possible entry without a visa to the European Union (EU), as an indirect consequence of having a trade agreement with the bloc. This would be done in the same way as in the case of Colombia and Peru, said European officials working in the region.

Mauro Mariani, political and economic Counselor of the EU to Ecuador, said: “Surely this comes on the institutional radar of the EU and probably something that will begin to take shape over the coming months”.

In addition, Miriam García Ferrer, Chief of the commercial section of the European Union in Colombia, in an interview last May with El Universo, said: “Once the agreement is applied, it would be discussed if Ecuador would be part of that list of countries that are exempt of the Schengen visa”.

“Because the Europeans have realized that if we want to do business and we want entrepreneurs to come, such access must be eased because of that, this proposal has been made, which already is in process of completion to allow Peruvians and Colombians traveling without the visa”, she said.

Mariani said that the process is under way to Peru and Colombia. “It is not yet under way in the case of Ecuador, but with the conclusion of negotiations, preparation of the term of the agreement and the very similar experiences in neighboring countries, it will probably take its own path”.