U.S. Consul expects that negotiations with Ecuador could be maintained or grow 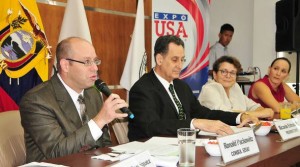 Ronald Packowitz, U.S. General Consul in Guayaquil, said yesterday that he expects that trade between his country and Ecuador could be maintained or grow up slightly this year compared to 2013 figures. Last year, the commercial exchange between the two countries generated nearly $ 19 million.

“If trade levels are maintained, we glimpse in 2014 a trade (…) equal or slightly greater than that of 2013,” said the Consul during the presentation of the second edition of the USA 360 ° Expo, which will be held in Guayaquil between October 23 and 25 and will be supported by the Consulate and the Embassy of the United States.

Meanwhile, to encourage trade between the two countries and in commemoration of the 238 years of independence of the United States, celebrated today, the guild organized a series of conferences and an open house in which products and services were offered by 12 companies from the chamber.