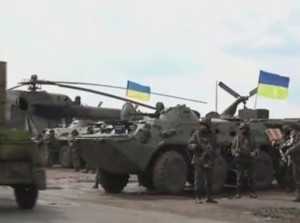 A a mile long row of tanks, armored vehicles and trucks, arrived on Wednesday from Mariupol, without waging battles, and dispersed to various places, said to AFP Ukrainian soldiers.

Ukrainian troops are located 23 km south of Donetsk city, east of the country while excavators were digging trenches in the fields nearby Olenivka village.

The objective is to surround Donetsk and Lugansk, the two main insurgent strongholds. In recent weeks Kiev forces retook several cities in hands of the rebels and the Ukrainian government announced the imposition of a blockade of Donetsk and Lugansk.

Ukrainian President Petro Poroshenko, claimed to have given the order that the operations against the separatists do not cause deaths among the civilian population.

But according to testimonies collected in the field, few shots attributed to the Ukrainian army reached the suburbs of Lugansk.