Unions will contribute to the change of the productive matrix 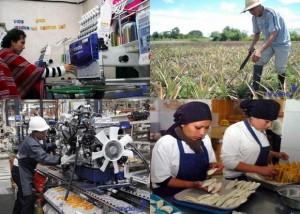 The Ministry of Labour directed the workshop on “Information and training of Management of Association and Social Dialogue,” in which leaders and officials of the Single Confederation of Workers (CUT for its Spanish acronym) participated, with the aim of strengthening the work they perform and contributes the change of the productive matrix.

Vice President Jorge Glass attended the workshop, “Without labor force, there is no productive force,”the official said, adding that “now in the country there is a different type of economy, a different production network, where all workers are important.”

Oswaldo Chica, president of the Single Confederation of Workers, described the workshop as a historic opportunity for workers to interact directly with the Government and find the best conditions for workers in the country.

Representatives of the Network of Teachers, health workers, sex workers, artisans, among others, participated in the workshop. It is expected in the coming months to replicate this activity in Guayaquil and Cuenca.