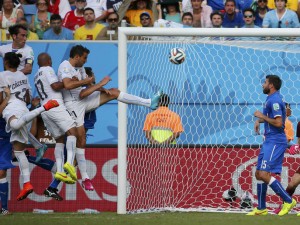 Uruguay got another victory, this time against Italy which was eliminated in the first round.

The Uruguayan team, who had lost the first game against Costa Rica, and then achieved great victory against England, now defeated the Azzurri and is in the second round.

Diego Godin scored the only goal which came in the 81st minute from head shot in the second half.

With this result, the Uruguayan stayed with six points, while Costa Rica that drew 0-0 in Belo Horizonte with England, finished as first in the group D with 7 points.