Uruguay and Mexico thrashed in the repechage round 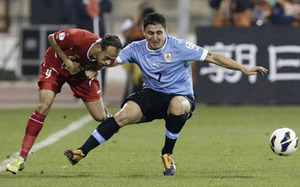 Uruguay thrashed Jordan with a final score of 5-0, and Mexico added another victory, with a score of  5-1, practically sentenced the playoffs with their overwhelming effectiveness round games.

After both Latinamerican teams added many goals totheir respective rivals at the start of the playoffs for a ticket to the World Cup Brazil 2014, is widely possible that for the first time ever, Latin America leads a group of 9 teams to the greatest soccer tournament on the planet.

Brazil 2014 would thus have the following nine Latin American representatives: the host, Argentina, Chile, Colombia, Ecuador and Uruguay, by CONMEBOL, and Costa Rica, Honduras and Mexico in the Concacaf. Looking back at the history of the World at the site of FIFA, the maximum number of American representatives was 8, just like in the first world cup, that of Uruguay 1930, in which the teams that played were by invitation only.

Today several playoff matches will carry out in Europe, including Portugal, Sweden, that will settle which star player would be out of the competition: Cristiano Ronaldo (Portugal) or Zlatan Ibrahimovic (Sweden).

Ecuador will train with Argentina tonight