The report of the Logistics Command of the Terrestrial Force concludes that the non-lethal material available to the military “is not enough” and “is expired ”. The document , dated November 25, 2019, was one of the inputs to initiate the processes of “acquisition of non-lethal material to be used in operations against riots, riots and counterinsurgency.” 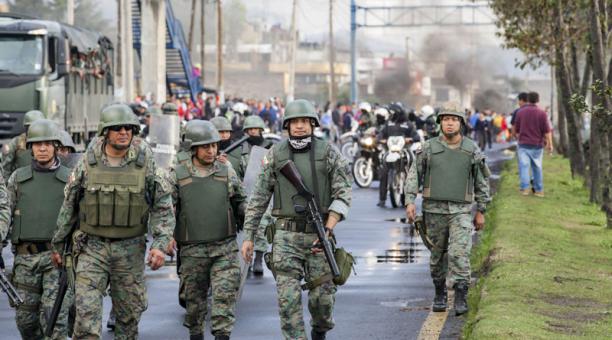 These are three contracts signed on December 12 between the Ministry of Defense and US companies. for USD 3.6 million. These establish the amounts, characteristics and deadlines.

The first corresponds to the purchase of 179 070 projectiles , pellet type, and tear gas for USD 2.9 million. There are also 12 GA rubber sphere cartridges that are activated by means of a shotgun , according to Army information.

Its speed reaches 165 meters per second and its reach reaches 30 meters.

Other ammunition are the “stunner” cartridges that are made of plastic, black powder and sawdust that are also activated by means of a shotgun.

This contract includes the purchase of GS (tear gas) for use by hand or from carbines . The specifications on its scope and speed of this last item are not stated in the reference specifications . But, according to riot police, this material can reach distances of 70 to 100 meters.

In a second contract, the Ministry of Defense purchased 1,000 12-gauge shotguns for non-lethal projectiles. The deadline for delivery of both processes will end on February 5.

Non-lethal armament concentrates the attention of human rights defenders . According to a coalition of six organizations, which presented a report after the October protests , there were people who lost eyes and fatalities who were hit in the face and body.

There is also a report that the United Nations issued at the end of last year. There he recommended that the security entities refrain from using rubber or metal pellets.

Each process has a Necessity Report prepared by the Land Operations Command . In this analysis it was evidenced “the lack of non-lethal material for employment in operations”, which the military developed during the demonstrations that took place from October 3 to 14, 2019.

In the document the concern was established to provide the supplies “with 204 combat teams, consisting of 20 people each”. This corresponds to 4,080 soldiers .

With the purchase, 15% of the personnel used in riot “military operations” would be supplied. It is also clarified that with the new equipment the operational capacity will be increased “in case of new disturbances that alter public order”.

On the other hand, within the Necessity Report it is requested to acquire 3,000 riot shields and 3 753 robocop type suits. However, on the page of the Public Procurement Service (Sercop) , the contracting terms for these implements do not appear.

On the official website of that entity there are nine other processes to acquire riot gear. Its status is labeled “completed” and the award stages or the signing of contracts were not reached.

When opening the attached digital files , the initial resolutions with which the Army justified the purchase of various items , including multiple GS gas launchers (up to 30 mouths), drum grenade launchers with capacity for six projectiles, ammunition; communication equipment, suits, shields and spare parts for riot vehicles. One of the specifications included a reference amount of USD 6 million.

These began on November 25, days before the three processes were published in which an economic understanding was reached.