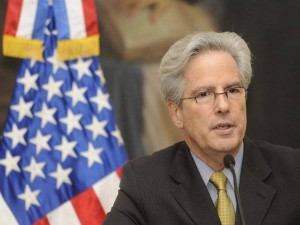 The former Deputy Secretary of U.S. Hemispheric Affairs, Arturo Valenzuela, rejected the imposition of sanctions from his country to Venezuela; considering them “counterproductive.”

Valenzuela assured that it is necessary to leave “the spiral of polarization that exists”, “that does not benefit a process to find a solution” to the crisis in Venezuela and recalled the mediation conducted from the Union of South American Nations (UNASUR for its Spanish acronym) and the Vatican.

The official opposed to the motion, which is voted today at the House of Representatives, where Republicans are urging the government to impose sanctions against members of the Venezuelan government, who are suspects of violating human rights.

These unilateral measures, he said “will provide more fire (ammunition) to some sectors of the Government of Maduro” which are going to criticize the United States, accusing it of interference and stressed that “it will not benefit the opposition.”