Why Correa can not live without his weekly addresses? 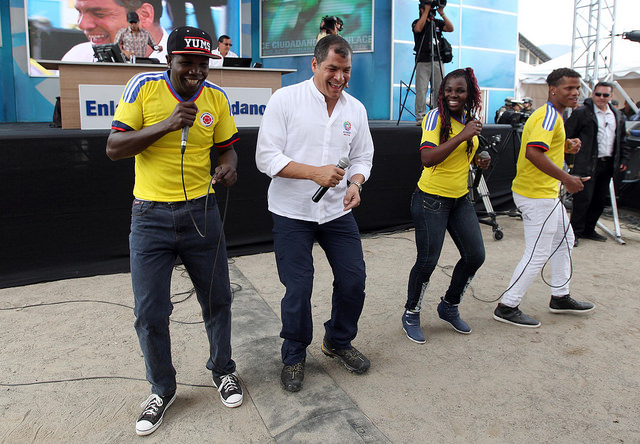 The weekly address returns this weekend to its original format. And the 4pelagatos website posted an article about why President Rafael Correa maintains the “Citizen´s link.” This contains some of the secrets of the populist power of the media age: the speech as a power generator, a speech that can not negotiate its supremacy; the leader as a performative artist who does not come into ethical or moral considerations; an unconditional public who plays the role of happy and grateful people … The “Citizen´s link” builds a closed universe which presents itself as the only true version of reality.

That is why the media, that could give other versions of the facts, get in the way. The “Citizen´s link” is the theater where every Saturday power is displayed and exercised. A platform power can not do without and whose main scenic features are:

Entry: The “Citizen´s link” starts with a simulation of a popular party.

The place: Arturo Tello, from the Ministry of Communication, presents the place. A town or a neighborhood chosen for having the following characteristics: its population supports the regime and has benefitted from government´s new works, so there´s a reason to brag about.

Guests: there is a VIP area (that´s how he calls it) for the local notables: the president of the transport cooperative, the winner of a beauty pageant for old ladies, the fire chief, the principal of a little school … He presents them, as if he knew them for a lifetime.

The scenario: There is a stage where He is always visible to everyone. Behind, a giant screen displays the image of the tricolor flag waving. For television, this is the perfect framing: the camera, which is slightly below, captures him with the flag behind him.

Music: Musical Curtains close each thematic segment. There are militant songs (“How will we build the homeland,” “more than a thousand reasons” …); tearful-sentimental (We will triumph for you …), propagandistic (We already have a President, we have Rafael …), vindictive (They lie, they lie, what a way to lie, every day, every day the newspapers published nastinesses …), nationalistic (Ecuador always first, first in our hearts) and the popular repertoire.

Legitimation resources: He does not need to be justified. But against possible opponents, he bears the attributes of his authority: his honoris causa, his postgraduate studies, his travels, his book, his junction with the Crème de la Créme of the pontifical academy, his friendship with the Pope or with Miguel Bosé, his status as a continental leader …

The artist: He speaks. He builds senses that are beyond the truth or lies, manipulation or honesty. No matter if what he says is true or not, because reality is constructed with his speech. And who does not recognize this will become an irreconcilable enemy.