YASunidos did not complete number of signatures

A few minutes ago the president of the National Electoral Council (CNE for its Spanish acronym), Domingo Paredes, announced that only 359,761 forms presented by the YASunidos group were verified and that 239,342 were rejected.

With this result the environmental group fails to complete the nearly 600,000 signatures (5% of the electorate) required to call a referendum to stop the exploitation of the ITT oil fields in the Yasuni National Park.

According to Paredes, many signatures were canceled due to problems of invalid ID cards for being underage, illegible images, incomplete ID cards and signatures that did not correspond to the forms submitted by the group.

For his part, the YASunidos group denounced the whole process through their Twitter account: “The @cnegobec speaks of irregularities, we speak of FRAUD. 66% of delivered signatures have been invalidated, there is no transparency!” 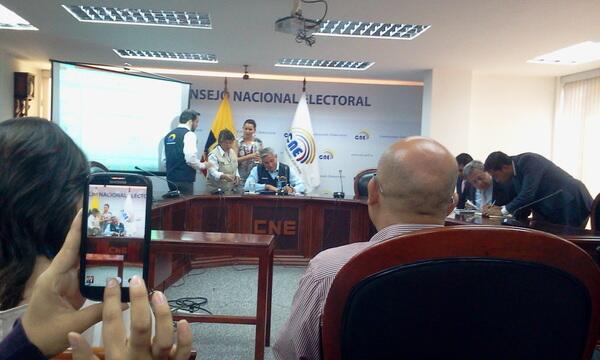 Domingo Paredes during the press conference.

Juan Carlos Varela is the new president of Panama

EU approves removal of Schengen visa for Peru and Colombia