100 kilos of cocaine were seized in Manabi 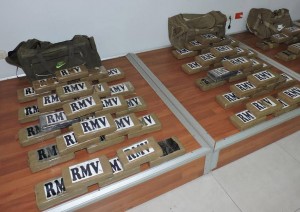 One hundred kilos of drugs were seized last Friday in a community in the province of Manabi, in the Arenal operation, in which four people were apprehended, three Ecuadorians and a Guatemalan, confirmed Edmundo Moncayo, national director of Narcotics.

The operation was led by officers of the Narcotics Investigation Unit (UIAN), who detected in a van three suitcases with 85 packages of cocaine. According to Moncayo, the cost of the drug amount to a million and a half dollars.

Preliminary investigations indicated that the drug would have entered from Colombia and they presumably intended to take the alkaloid to Guatemala from Los Arenales resort.

Oscar EMM, of Guatemalan origin, would be the leader of the band, who along with Ecuadorians Manuel A.C., Ronald R.P.D. and Johnny H.C.D., were arrested.

What does the state do to eradicate drug addiction as a public health problem?