Since mid-October, the exhibition ‘Secondary Effects’ has been open at the No Lugar Gallery . This exhibition brings together the work of 19 visual artists, whose work opens a space for reflection on issues related to the pandemic. 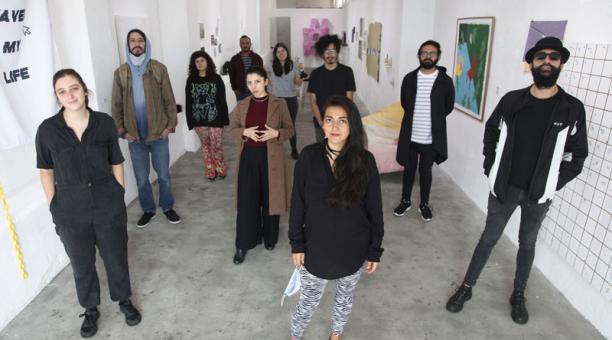 The works invite the viewer to think about the relationships that people have built in private and public spaces, with the use and abuse of social networks and the Internet , with their self-representation and with the dystopian landscapes that have appeared in these months of confinement .

Francisco Suárez, curator of the exhibition, explains that the exhibition brings together pieces and projects that were not necessarily produced during the confinement, but that do dialogue with the current situation , based on the idea of ​​secondary effects. In pharmacology this term refers to the adverse consequences caused by ingesting medications.

“From research and artistic creation this term – he says – enables the construction of narratives and views in relation to collective conditions linked to the pandemic and confinement”.

The exhibition has two curatorial axes . One is related to the experience that people have had with their intimate space and with the outside. In this context, paintings such as those of Andrea Vivi and Fernanda Murray appear, portraying different environments of their houses, in which they have spent this time of confinement.

The other axis of the exhibition is focused on works that speculate on different dystopian scenarios from humor. Works such as that of Freddy Guaillas are framed within this idea, who moves llamas, animals that are part of his daily landscape, to unusual places such as apartments.

Another artist who explores current times from humor and sarcasm is ‘Ralex’. Among the works exhibited in this exhibition is a fortune teller who reads the hand of another person with a surgical glove.

As part of the activities parallel to the exhibition, on October 31 there will be a guided tour. That day the gallery will be open until 6:00 p.m. The works will be on display until next November 7. It is entered by appointment.