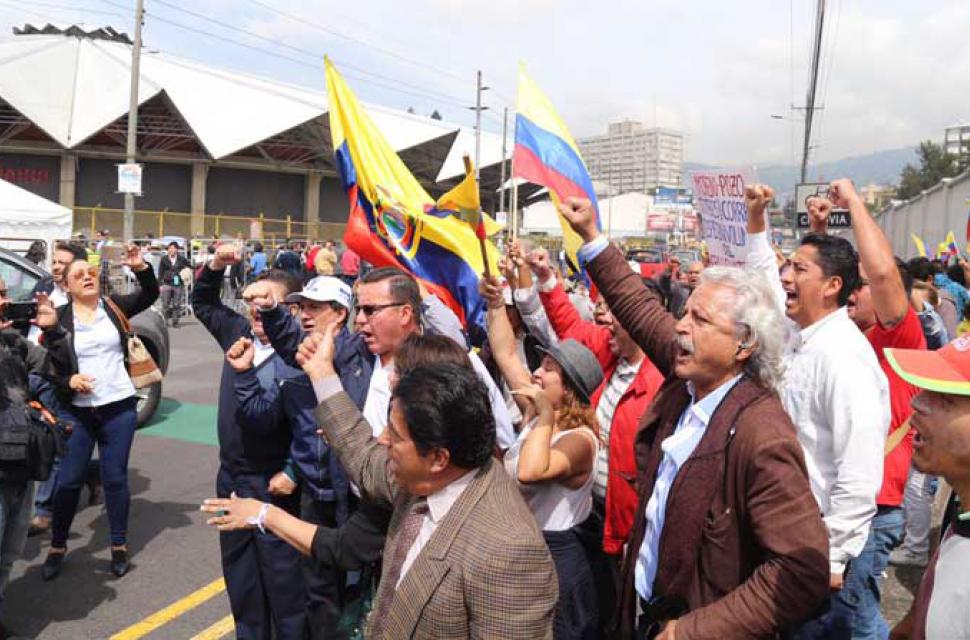 The representatives of 59 guilds of the country sent a letter with a set of proposals to President Lenin Moreno on February 27, 2018.

The businessmen hope that the measures will be included in the program that will define the direction of the country’s economy until 2021 and that will be announced by the Government these days.

Richard Martínez, president of the Ecuadorian Business Committee (CCE), commented that the letter makes a diagnosis of the economic situation and proposes 12 proposals to reactivate the economy of Ecuador.

Moreno presents his second plan after last year sent a package of reforms that had to be reviewed by the Executive. The Law of Economic Reactivation was approved last December 29 with more than 60% of changes, amid criticism of the business sector that called it a collection.

This newspaper consulted representatives of eight productive sectors, who insisted that for the economic reactivation measures are necessary, such as a reduction or elimination of tariffs, the revision of the customs tax and the exit tax, and more momentum in the signing of commercial agreements with the main partners.

On a possible increase in taxes or tariffs, the sectors claim that they are already the main taxpayers and generate thousands of jobs.

The customs fee must be revised

José Antonio Camposano , president of the National Chamber of Aquaculture, assures that it is essential to provide support, for example, to the Ministry of Foreign Trade and Investment in trade integration agendas, such as the closing of negotiations with EFTA and South Korea, where shrimp currently pays 20% tariff. The sector grows in volume and needs the opening of destinations, as happened recently with Brazil after 18 years of blockade.

At the local level, Camposano assures that it is necessary to reactivate the Comex to review certain measures: the customs service rate and the tariff burden on imported products; in particular, inputs for machinery of productive activity and food.

For Juan Carlos Díaz-Granados, executive director of the Chamber of Commerce of Guayaquil, it is important to carry out actions in the economic area. “Failure to do so will mean a social problem, which will become political.”He adds: “the trade has been supporting all kinds of restrictions for a decade that increase the cost of living, reduce business and destroy jobs”.

That is why it makes several proposals: open markets, lower and repeal taxes, conquer investments and create an environment of legal security. In addition, the signing of a commercial agreement with the United States, the elimination of the tax on the exit of foreign exchange (ISD) and the advance payment of income tax and create more modalities of employment contract.

The industrialists propose to eliminate the ISD

Caterina Costa, president of the Chamber of Industries of Guayaquil, believes that to improve competitiveness, strengthen private investment flows and generate full employment is necessary to review tariffs for raw materials, capital goods and intermediate inputs.

It proposes a progressive reduction of the tax on the exit of foreign currencies, until its later elimination, in 2020.

Costa also believes that, through legal reform, limits must be established on the growth of public spending and create oil savings funds. The union proposes a legal reform so that the private company helps the Government in the construction of works, in exchange for a reduction of taxes.

Enrique Pita, president of the Chamber of Construction, considers positive the derogation of the Capital Gains Law, because in his opinion it was a determining factor in the recession that the sector is experiencing and that registers 27 consecutive quarters.

This scenario was reflected in a lower number of projects undertaken and a fall in the sale of the main suppliers of goods and services, in addition to unemployment. “Trust is crucial.

What builders do is based on trust. ” However, he assures that in the sector there are still aspects to be solved. Among them, the elimination of excessive red tape to approve a horizontal property or a municipal building permit, which can take up to 12 months.

David Molina, director of the Chamber of the Automotive Industry of Ecuador, points out that the sector requires several urgent actions to improve competitiveness and generate the incentive that allows greater incorporation of local content.

It raises the need for a public policy that sets an inverse tariff table, which allows to reduce the tariff of the CDK (parts and pieces to assemble cars in the country) as greater national content is incorporated. This will generate an incentive to link the product and allow the industry to compete at a higher level and with vehicles that come with zero tariffs from Colombia or with the progressive rebate programs established by the agreement with the European Union.

Financing for the agricultural sector

Javier Chon , president of the Ecuadorian Rice Industrialists Corporation ( Corpcom ), considers it essential to establish a minimum support price for each variety of grain: short, long and extra- long rice . He argues that the cost of production of each type of grass is different, as well as its price in the market.

Richard Salazar, administrator of the Association of Marketing and Export of Bananas ( Acorbanec ), says he expects to recognize the benefits that are still pending by way of ‘ drawback ‘.

Fiscal deficit, a problem to solve

Richard Martinez, who also chairs the Chamber of Industries and Production (CIP), believes that a comprehensive economic program should be set up to correct the underlying problem, not isolated measures. He considers that a structural problem facing the economy is the fiscal one.

The public deficit creates negative expectations for investors, since they see a risk in the business and evidence an inefficient allocation of resources. The country also covers the deficit with indebtedness. The payment of these obligations generates the outflow of foreign currency, which also impacts the external sector.

To correct the imbalance in the external sector, he proposes, for example, the elimination of the tax on capital outflow.

For Andrés Robalino , executive director of the Chamber of Industries, Production and Employment of Cuenca, the main problem of the country is the little generation of employment. He considers that the participation of the academy is very important to initiate a change in the technical training processes.

Exemplified the case of Cuenca, where they work with dual training, “a system that adapts to the needs of the productive sector, with support from the academy.” He added that this must go hand in hand with technology transfer.

Ensures that once you have the proposals of the Government, the union is committed to generating employment, increase production and cover the new markets that Ecuador is opening with other countries. (I)