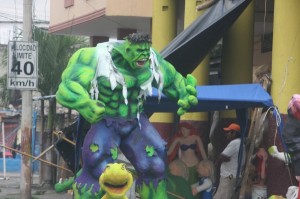 In Guayaquil, Ecuador, there is a tradition of over 50 years. Each December 31 thousands of families go out to the streets to burn a puppet called “viejo.” Children, parents, and young people put their puppet, wich have been feed with explosives, whistling, gratitude, or desires, in the middle of the street.
At 24:00 after family hugs, eatting grapes, flipping the block with a suitcase, and after grabbing a hundred dollar bill, the old year begin to burn and the fireworks to explode.

To maintain the burning puppets tradition, artisans of the entire city work since September making puppets of all imaginable characters, from the Ecuadorian President to the Shrek gingerbread.

6 de Marzo Avenue is one of the most popular streets while talking about the creation of puppets. This neighborhood accumulates the biggest number of “viejos.” Entire families have made the “años viejos” creation a tradition to get some extra money at the end of the year.

“Viejos” are done with paper, cardboard, starch, paint, and lacquer, most of the materials are recycled. The most expensive materials are the lacquer and the paint. A puppet of 1.80m takes three days to build and the price may vary between $100 to $300,depending on the design.

However, there are all kind of prices and sizes because the important thing is to fulfill the “año viejo” burning tradition.” Small puppets of 30cm, and puppets up to three meters are found at the traditional 6 de Marzo.

In the south streets of Guayaquil there are also spectacles to enjoy. Puppets of 8 meters are created, since early December, where an entire neighborhood work to create the giant puppet which sometimes travels to Salinas to be burned. Materials fort hese “viejos” cost about $6000. Before the municipal ordinance -which does not allow burning puppets in regenerated areas of the city- the creation of puppets was bigger, said sellers . However, the fact of burning troubles from the last year is a tradition that does not want to die in the ashes that come from the last minutes of December 31.

Irak, Pakistan, and Mexico are the Most Dangerous for Journalists