Daniel Honciuc is very excited. And her mother Liliana Menéndez is proud . The boy, 12 years old, has already been admitted to 12 universities in the world, where he could study from the next cycle, since in June 2020 he will graduate from the International Baccalaureate Program, at the Cotopaxi Academy, in Quito. 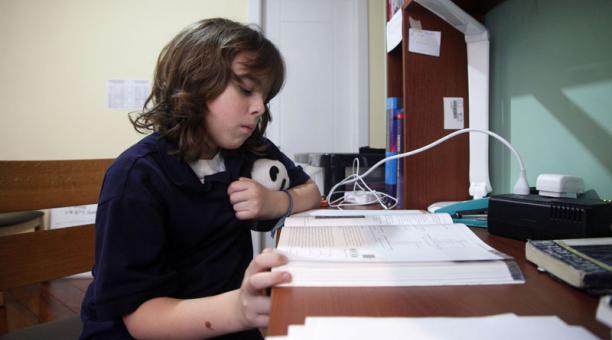 Daniel’s deep giftedness is an exceptional case of less than 2% of the planet’s inhabitants . To describe it, at their school they say it is one in a million.

When the 2019-2020 school year began , in Sierra and Amazon, Daniel began to focus on the application processes for universities . He had to write essays , in addition to taking standardized tests, which are usually answered by high school graduates , from 17 to 18 years old.

Her goal , her mother recalls, is to study physics and aerospace engineering at university. The specialty involves developing knowledge of electrical and electronic engineering, programming . He knows that he can follow another race at the same time and is meditating on that.

Every time an answer from a university center came to his home in the north of Quito, the boy celebrated with his mother, since they both know the hard work behind it. Not because he was 12 years old, they gave him points of advantage , he simply presented himself as one more applicant , under the same conditions. Then, in the middle of the process and even at the end, some universities in the higher education centers found out that they were dealing with a minor.

“From an early age, my son Daniel felt he was ready for college. It is not only that the study program will allow you to delve into the subjects of your interest but to do research . That’s what he wants ”, says his mother, in an interview with EL COMERCIO.

As always, she and her son doubted that allow you to access those programs because it always causes discussion inner have someone under age . “We are happy that the universities have decided to accept it. It is not about scholarships . It’s amazing, they make him feel supported , he’s tried hard. It has always been the smallest in his classroom . At the Cotopaxi Academy he feels good, he loves his school , his classmates are older than five or six years old ”.

On February 10, 2019, this newspaper told the story of Daniel, entitled ‘Superdeted children reveal intensity and sensitivity’. In the Cotopaxi Academy, Daniel is the first case of acceleration , that is to say, a few years ahead of him, without taking into account his chronological age but his need and ability to learn . The first acceleration occurred when I was 4 years old and the second, at 9. They were one course and the third, four courses. It was made after reviewing his history with Linda Silverman, the psychologist runs a center that studies giftedness in the United States.

Liliana highlights the fact that her son is a hard worker . She has always trusted her ability , but did not know how the acceleration process would turn out. He had great joy in this cycle , when the Cotopaxi Academy notified him that he earned the right to integrate the honor roll : he was an escort of the flag.

Daniel Honciuc, in the ceremony in which he was proclaimed an escort, part of the Academy honor roll, Cotopaxi, in September 2019. Photo: courtesy Liliana Menéndez

This season, this exceptional boy, who receives the full support of his mother, also took time to volunteer . He has taught robotics and physics to other children.

The health emergency , caused by the covid-19, which is experienced worldwide, also puts this family in distress , who must choose which university or which option to choose, in the midst of this situation. It will not be the first time that Daniel Honciuc is linked to higher education . He took advanced online classes from the Johns Hopkins University Center for Talented Youth from 2015 to 2018.

Venezuelans: 90 migrants return to their country by flight from Ecuador