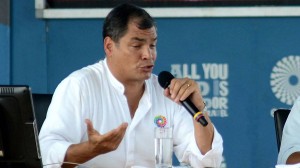 There has been a chain failure. First, that of the Turkish security staff. They could not act in foreign territory (…) if someone shouts, our security staff is the one that has to act, that is the second failure, why didn´t our security staff act? … Where was the Ecuadorian security staff?” Questioned President Rafael Correa on Saturday in his weekly address No. 461 broadcast from Daule.

Thus, the president referred to the protest staged on Thursday by 30 people against the President of Turkey, Recep Tayyip Erdogan, who gave a lecture at the IAEN in Quito. But he also blamed the women that protested and were subsequently attacked by the Turkish security staff.