A National Intelligence Center instead of the Senain 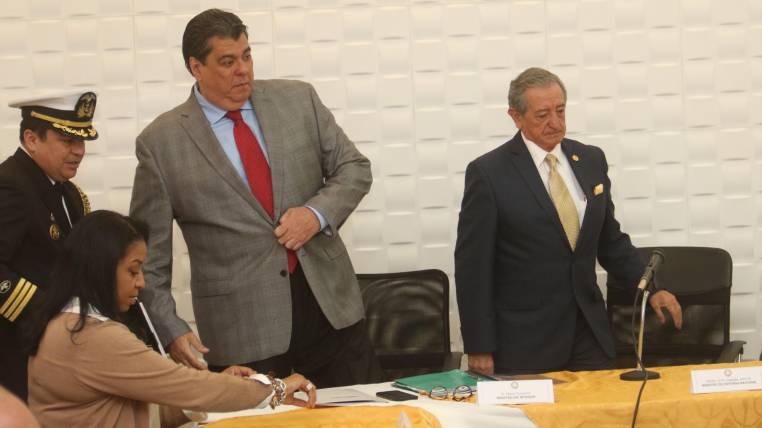 The announcement of the elimination of the Senain was made in March by President Lenin Moreno, but to make the offer concrete, the Sectoral Security Council, chaired by Defense Minister Oswaldo Jarrín, has held several meetings.

The life of the Senain has not been very long. It was created in July 2009 as a consequence of the attack on the FARC camp in Angostura, in which the guerrilla Raúl Reyes and four Mexican students died, among others.

The Public Security Law that replaced the National Security Law gave life to that body. Since its creation, the questions came especially from opposition sectors that questioned the monitoring and surveillance that the Senain made of opponents.

Minister Jarrin said that, in addition to the implementation of the CIN, the Secretariat of the Public Security Council and the State will be created because he believes that it is not logical for a minister to be the secretary of that Council.

The two creations are part of the new Organic Security Code, whose draft will be sent to the Assembly at the end of the month. There are four laws: Organic Law of Defense, Public Security and Intelligence and Risk Management.

The minister affirms that the four bodies are indispensable for the operation of the State in terms of defense, security, risks and intelligence.

The approval process in the Assembly will not be immediate. Jarrin indicates the document that the Council sends to the Ministry of Justice, where workshops will be held. You will come back to the ‘hexagon’ for your six member ministers to discuss it.

Finally, the four bodies of law will reach the Border Commission of the Assembly for debate and approval.

The Council held a new meeting yesterday to continue with the exchange of ideas that will be included in the texts of the new legal bodies that will replace the previous Public Security and State Law, which covered all areas of security.

One of the advantages of the new intelligence agency is that it will allow it to “render accounts, attend to the needs of the State and not to personalized criteria,” said the minister.

Ex-Segolan Diego Salgado agrees on the disappearance of the Senain “as a persecution of politicians and characters opposed to the regime.” He believes that the intelligence of the State should return the Armed Forces and the Police, but strengthened with suitable tools and professional instruction for those who exercise it.

One of the problems with the Senain was not paying attention to the threats of organized crime, which caused between January and April 10 attacks attributed to the narcoterrorist front Oliver Sinisterra, led by Walther Arízala, alias Guacho. The cost of that lack of foresight was the loss of 9 lives in the hands of that criminal group.

A report from the Senain realized that intelligence monitored, in 2016, around 335 press conferences, 943 assemblies, four hunger strikes, 328 marches, as anticipated events of public order control.

The National Intelligence Secretariat (Senain) was created by Executive Decree number 1768, in June 2009. Among its tasks it had to be responsible for producing intelligence, strategic intelligence and counterintelligence.

Another question to the Senain was the alleged payments made to members of the 30S Commission, which would have allocated a portion of the resources to the editing of the videos of the police revolt. (I)