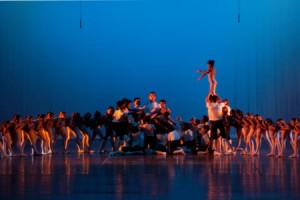 Aglae and Gloria Febres-Cordero studied ballet since childhood, when they finished their higher education they had a vision: to create a ballet school, which was installed at their home in 2002 with the help of their parents.

Four years after founding Eptea, which is the school name, they opened a special program to help poor children. The idea was thought by Aglae because her experience in foreign countries taught her that “low and middle socioeconomic levels are who most enriches art.”

So Febres-Cordero sisters found the reason to promote programs to support this part of the population: Formando Partners, which began in 2006 with the aim of provide scholarships for boys to study ballet. The education that children receive is equal until 12 years old, after that, they are separated in two groups in order order that boys can learn the steps to be partners of ballerinas and girls learn to dance like “swans.” The institution is focused on the social, so after two years from the inauguration of the program Formando Partners, also began Formando Mujeres which also gives scholarship for girls.

To offer their assets as an institution that assist poor children in the city, Eptea works constantly with the NGO “Children International”, which gives Eptea a list of sponsored children who are interested in dancing, in this way they offer to them a full scholarship in the academy.