Alec Guinness would have turned 100 today 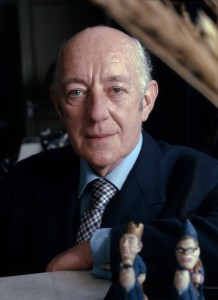 In 1980, Alec Guinness received an honorary Oscar for his film career

Sir Alec Guinness, born in London on April 2, 1914, today would be 100 years old. Guinness, one of the best performers of showbiz, deserved the nickname of the man of a thousand faces.

Among his most famous performances are: Herbert Pocket in Great Expectations (1946), Fagin in Oliver Twist (1948), Colonel Nicholson in The Bridge on the River Kwai (1956), for which he received an Oscar Academy Award. He also participated in such classics as Lawrence of Arabia (1962), Doctor Zhivago (1965), and in the famous trilogy of George Lucas: Star Wars as Obi-Wan Kenobi.

Considered as one of the top three British actors alongside Laurence Olivier and John Gielgud, after World War II, he made the transition from Shakespearean theater in his native England to the screens of Hollywood.