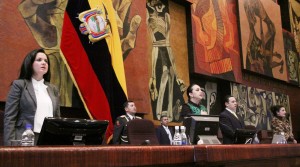 The Alianza País (AP) ruling majority rejected the decision of the Inter American Press Association (SIP for its Spanish acronym), which required the Communications Act to be derogated for allegedly restricting rights by controlling content and the imposition of sanctions on the media. The block described it of “being an attempted threat to international principles of sovereignty, independence and self-determination of the Ecuadorian state”.

92 Assembly members (with 91 votes in favor and 1 in blank vote) from the 117 voted for the resolution against the measure proposed by the SIP. The block also proposed to Latin American and Caribbean parliaments to form an oversight in order to “preserve the rights of citizens to receive unmanipulated information on democratic processes that different countries face.” The votes against the opposition were 24 and 1 abstention.

The President of the Assembly and author of the initiative, Gabriela Rivadeneira, said that the SIP “does not care about freedom, but to preserve the prerogatives of its members, and oligarchic business interests of which they are the spokesperson”.

Luis Fernando Torres (PSC-Cambio), in his opinion said that considering that the Assembly places itself at the height of the SIP is worrying and asked for the resolution to be withdrawn.