“I came mainly because my hands get numbed, I think it’s probably because of the crutches I carry and the pressure my hands suffer when I have to walk with them.” Melba affirms as she gets to the place where the brigade is providing attention. She lives alone and came all by herself.

“Doctors say I need Hip Replacement Surgery, and I would like the Foundation to help me with this.” She affirms, and honestly adds that she didn’t know much about the labor that the Alvaro Noboa Foundation does, but she thinks it’s great.

Sucessful Ecuadorian businessman Alvaro Noboa is a philanthropist with a social conscience. Social support such as: free medicine, medical attention for poor people are always central concerns in his agenda. 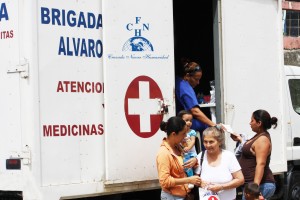 fighting disease and poverty are the mainstays of this crusade. Other objectives are: helping people who live in poverty and ignorance.  This Foundation is based on Christian beliefs; love being the most important factor of mankind, unity in diversity and self-improvement. Thirty-tree years later, the Foundation continues with its mission.

The “Crusade for a New Humanity Foundation” (Fundación Cruzada Nueva Humanidad) Foundation travels around the country, providing medical service and assistance to marginal areas in rural zones and the outskirts which lack basic services. Besides, the Foundation is always present when our country suffers natural disasters.

A team of professionals doctors assist the public attention. Meanwhile Alvaro Noboa permanently allocates resources that come from his personal fortune and the companies involved in social development programs undertaken by the Foundation.

“I think the labor that the New Humanity Foundation does is very good.” Mariela affirms. “I have the results of all the tests other doctors have previously run on me, but I can’t go back to Portoviejo where the Doctor lives because it’s too far away and my body aches too much to travel”.

She adds that she came with her granddaughter, who is also suffering from a cold and needs some medicine and vitamins.

Mobile clinics of these medical brigades tour the country providing free medical care and medicines to mothers and their children, adults and the elderly who are in need. Alvaro’s Noboa resources have allowed him to donate 600 wheel chairs to 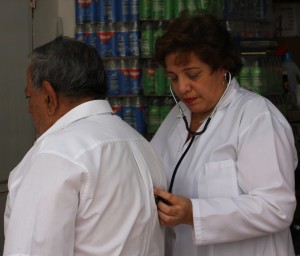 the less fortunate, over 300 hundred computers with Internet access were given to public schools for educational purposes.

In 2010, over 10,428 patients have been attended in September, only in the Guayas province alone. All over the country more than 20,000 citizens have received help from Alvaro’s Noboa Foundation. The medical team have traveled the coastal provinces fighting infectious diseases in poor towns. A deworm campaign has been conducted massively in the schools of the Coast, Highlands and the East of Ecuador.

The battle against diseases lead by the medical staff continues, having faced high rates of anemia and malaria in Esmeraldas, Manabi, Los Rios. Their biggest threat was an outbreak of tuberculosis and skin diseases El Oro province.

Mariana Chillán came by herself, after her son saw the people on the street and headed home to tell her. “I´m dizzy and my bones ache” she says, “I am so happy the Brigade came because sometimes I go to the local medical clinic and one has to be up before 3 A.M. to get there and be able to get some attention”, Mariana added.

“Sometimes I have been there at 3 A.M. and still haven’t been able to get the attention I needed, and today I will finally get it”. She says.

The main purpose of the “Crusade for a New Humanity Foundation” (Fundación Cruzada Nueva Humanidad) is to practice and encourage preventive medicine. Thanks to Alvaro Noboa’s commitment to this cause, many lives have been saved.