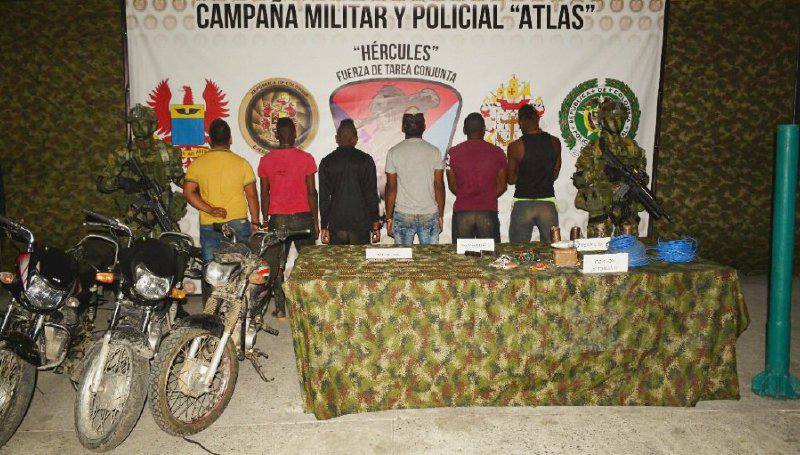 Six members of the dissident group of the FARC led by alias Guacho were apprehended by the Colombian authorities in the rural area of Tumaco, bordering Ecuador.

Among those captured are alias mantequilla (Butter), considered an expert in the handling of explosives and who is believed to be responsible for several terrorist attacks against public forces.

The Colombian Military Forces also said that within the detainees is alias Maicol, second in command of the terrorist support networks of the Candelilla militias.

This subject would have been for four months with Guacho and became allegedly in charge of specifying selective homicides, kidnappings and extortion in the region.

Colombian media have indicated that in the last 48 hours they have captured 23 people who are part of the self-proclaimed front Sinisterra Oliver “, led by Walter Arizala, alias Guacho, identified as responsible for the death of the three members of the journalistic team of El Comercio .

In Ecuador, the Office of the Prosecutor maintains eight fiscal instructions and six previous investigations involving 35 Ecuadorians, ten Colombians and one Mexican. All were arrested, between October 23, 2017 and April 16, 2018, in twelve operations carried out in provinces such as Esmeraldas and Santo Domingo de los Tsáchilas.

The authorities investigate the links of the detainees with the group of dissidents.

During a press conference he said he arrived in Esmeraldas to see how the population is doing and to review the studies and plans of the border units.

Jarrin said that a professional in the field of communication will be selected to act as a spokesperson at the different levels.

He also confirmed that Colombia will continue to have cooperation in intelligence, information, training, but not in military matters.

The minister indicated that the Armed Forces will give support if required by the International Red Cross for the recovery of the bodies of the deceased journalists.

After his visit, the Minister of Defense, Oswaldo Jarrín, said that with the information gathered, the data will be presented to elaborate and update the security defense plan, which will not only involve military aspects, but also support the population in the Social field. (I)